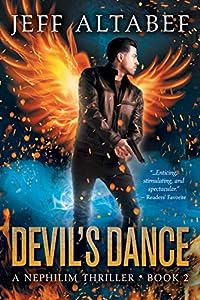 An amazing new technology engineered to make people smarter, a series of gruesome murders, and a mystery so dark, it threatens everyone.

I'm a Nephilim, born of a fallen angel father and a human mother. This makes me special in ways I don't fully comprehend yet.

A war is brewing between angels and demons, and like it or not, we'll all have to choose sides. I've chosen the side of angels, a curious decision for me, not only because I'm a killer, but because I enjoy killing. Still, an angel promised me that redemption is possible—even for me—and he needed warriors on his side. Did he tell me the truth? I hope so, but who can I trust?

In a small, sleepy, tourist town, an old friend asks me to help solve a series of gruesome murders that have been plaguing the town, but these aren't just random crimes. Somehow, they're connected to this war between angels and demons. I prefer working alone, not having to worry about others, but I team up with a self-described anti-technology hooligan, and a beautiful bartender I immediately fall for. If only they knew what I know. The foe we're facing is way more powerful than anything they can imagine.

I must solve the mystery before it's too late, because I'm certain of this one thing: everyone's soul is at stake.

EVOLVED PUBLISHING PRESENTS an intriguing, thrilling look inside a great battle between good and evil, possibly leading to the End of Days, with the second book in the award-winning "A Nephilim Thriller" series. [DRM-Free]