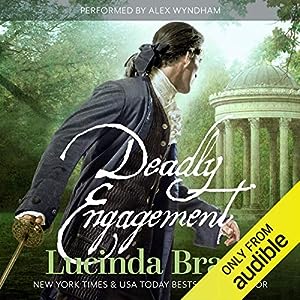 It's 1763. Career diplomat Alec Halsey returns to London and the shocking news his estranged elder brother, the Earl of Delvin, has not only killed his friend in a duel but become engaged to the woman he had hoped to marry.

When Alec reluctantly attends a weekend house party to celebrate his brother's engagement, he gets more than he bargained for when a lady's maid is murdered, the bride-to-be is attacked, and a guest is shot dead. Alec uncovers a connection between these sinister acts and his brother's duel. He must also confront a cruel twist of fate that explains why his brother loathes him and will go to any lengths to discredit him in Polite Society.