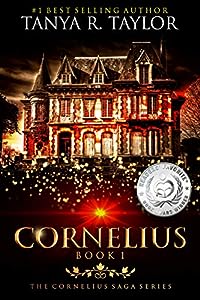 Curious 14-year-old Wade Cullen and his 13-year-old sister, Mira, investigate an abandoned house in their neighborhood that once belonged to a wealthy planter in the mid 19th century. While exploring the upper floor, Mira sees a bloodied ghost of a woman. Scared and determined never to return to the place again, Mira soon realizes that the ghost has followed her home, causing a stir in her family already troubled by her parents’ marital issues. A paranormal tale intertwined with drama, Cornelius is the first book in The Cornelius Saga Series by Tanya R. Taylor.

The story starts by giving readers a glimpse of the slavery era in the 1860s, when Cornelius Ferguson, a wealthy plantation owner, has his sights on a young female slave. Forward to the summer of 1965, we are introduced to the Cullens, a fine middle-class family. Wade and Mira have a great sibling relationship that any parents would be proud of, while loving mother Sara is a devoted wife to her husband, Michael. Unfortunately, Michael is a distant husband who’s unable to appreciate his family like he used to.

I found the transition of time and the sense of place to be solid, amplified by clean prose. The characters are memorable and easy to emotionally relate to. Taylor deftly connects the tragic past of the ghost and the troubles between Sara and Michael, setting the plot nicely for a poignant denouement. It’s a swift read and with a special excerpt from Book 2, Cornelius’ Revenge, it’s irresistible to find out more about the Cullens’ continuous entanglement with the undead.