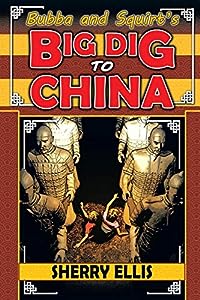 Bubba and Squirt's Big Dig to China by Sherry Ellis is the work of a great imagination; a pulsating adventure with a great appeal to young readers, cinematic and littered with humor. What started as an argument between Squirt and her brother, Bubba, mysteriously plunges them into an adventure they never imagined possible. Just because of a magic shovel and Squirt’s doubts that Bubba can dig a hole to China. But then the hole swallows the kids up and flushes them out in Xi'an, China, where they find themselves surrounded by Terracotta Warriors. But when the ghost of the first emperor of China appears and tells them that they can’t go back home until they find his missing pi, the kids know they are in real trouble. An encounter with a young girl and a grandmother who offer to help them gives them hope, but how can they find the missing pendant if they are being followed?

This children's book is engrossing. It is delightful, and from the very beginning the reader is absorbed by the exciting, first person narrative voice. The opening itself is humorous as the two protagonists argue to determine how to begin their story. I enjoyed the way the author allows the worldview of the kids to come out through the narrative. “I’m Bubba. And guess what? I dug a big hole to China. For real! And Squirt didn’t think I could.” Every page is filled with humorous dialogues and exciting scenes, starting with the discussion about the shovel right through to the exciting and adventure in China. The writing is impeccable, the characters well developed and likable, and the pacing fast. Young readers will love the characters and adult readers will also have a lot of fun following these characters. Bubba and Squirt's Big Dig to China is a rollicking ride to read and pass on.