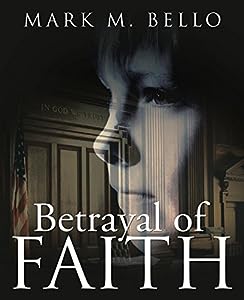 Betrayal of Faith by Mark M Bello tells the story of a family ripped apart after widowed Jennifer Tracey persuades her two sons, Kenny and Jake, to go on a church camping weekend led by the newly arrived Father Gerry. On both those nights the boys were subjected to rape and for weeks they would not talk about it. In one weekend their behaviour had changed drastically. On mentioning this to the church, they arranged for the boys to receive professional help and the story finally comes out. Jennifer decides to pursue the matter through the courts to prevent any more children becoming victims. She consults her former lawyer, who in the meantime has fallen on hard times. It’s the start of a long, hard road as she fights for justice, not only against Father Gerry but also against the Catholic Church.

I was so glad I chose to read and review Betrayal of Faith by Mark M Bello. It is one of those books when I ignore the dishes in the sink, the unmade bed, and sit and read, totally absorbed, from beginning to end. The characters are well drawn and spring to life off the page. The pace was brisk, never stalling on too many technical and legal details as the legal battle continues. There are heart stopping moments when you’re not entirely sure of the outcome. Vital witnesses go missing, one witness won’t commit to appearing for the defence. I liked the private investigator called Micah Love with his idiosyncrasies, and admired Zachery Blake as he pulled himself back on track. In the background are the shadowy figures of the Coalition, a church group set up to spy on how priests behave, but more importantly to cover up any mistakes and prevent any publicity detrimental to the Church. There is nothing they are not prepared to do to preserve the perfect image of their religion. There was a surprise twist at the end and the author did a great job in tying up all the loose ends. A modern book that peels away the layers of secrecy that surround the sexual abuse of children by the very people they trust. It’s a topical subject and Mark M Bello has created an excellent story. A well deserved 5 stars.