Reflections on the Wild Beauty and Characters of the Alaskan Bush 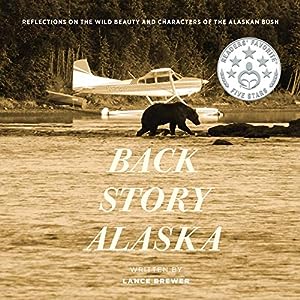 Back Story Alaska: Reflections on the Wild Beauty and Characters of the Alaskan Bush by Lance Brewer is the tale of an exciting Alaskan adventure of a life time. In 1993, Lance Brewer accidentally finds himself traveling to a remote fishing lodge located in Chuit Creek, west of Anchorage, Alaska. A California-based lawyer, he immediately falls in love with bush Alaska and so was planted the seed of this book. Learning how to fly a ski plane and planning to own a float plane to be able to explore Alaska, he goes back and stays at the Bear’s Den Lodge on the Ugashik River where he befriends Ted, Bob and Carol; people that share his fascination for the land, and are building a cabin adjacent to the Bear’s Den. He subsequently establishes Camp Brewer where he also hosts various guests as they share the Alaskan landscape with the bears, eagles, moose, whales and other animals that call Alaska home.

Lance Brewer's Back Story Alaska: Reflections on the Wild Beauty and Characters of the Alaskan Bush is an engaging adventure story that comes with beautiful pictures and heart tugging poems, and as such it is an original piece of work. Sometimes funny, sometimes poignant, Lance Brewer shares his Alaskan interaction not only with its awe inspiring landscape, but also with its adventurous people and its varied animals, Alaska's original inhabitants. And as we go through the pages and gasp at man's encounters with nature, we cannot help but reflect on our own personal struggles with hope, survival, love and life itself.