A Time to Die

Out of Time Book 1 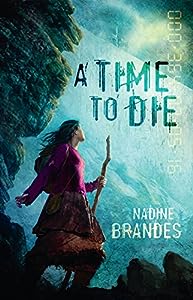 Christian fiction tends to come in two flavors: books written for other Christians, and books written for a secular audience (though usually with some sort of apologetic goal such as Tosca Lee’s work). A Time to Die by Nadine Brandes is solidly in the first category. A Christian dystopia, it features a Christian heroine, and a strong Christian message. While a commendable and well-written novel, it will not appeal to those who don’t have pre-established Christian faith.

Parvin Blackwater has a year left to live. In the Eastern United States, everyone receives a clock at birth that tells them the exact second they will die. The clocks don’t simply predict when genetics will cause a natural death; they predict accidental or violent deaths as well. When Parvin loses her clock, Enforcers (the de facto police force) shove her through the continent-length wall that splits the Eastern United States from the rest of the country — the punishment for “Radicals” as those without clocks are known. She must survive in a harsh new world that her sheltered life in Unity Village has not prepared her for.

A Time to Die weaves a strong premise, interesting science fiction, a spiritual message, and a likable heroine into a compelling, well-written novel. Brandes is a fine writer, adept at visual details, arresting images, and imaginative environments. Full of entertaining extrapolations, the science fiction elements shine as well done and overall believable. The story suffers from some pacing issues in the middle third of the book, but they’re offset by the inherent grittiness of the narrative. Brandes isn’t overly protective of her heroine, and doesn’t shy away from the necessary violence the world she’s created demands.

A Time to Die never gives a fully satisfying answer to the question of how the clocks work; whether they are “magical” in the sense of always being accurate (the novel hints this might not be the case) or if they’re subject to interpretation or manipulation of some kind. Though mentioned in passing, Brandes did not address the question of what happens when people seek to avoid their demise a la final destination. Suicide is explained away with a single sentence (nobody does it in the Eastern United States). Perhaps these questions will be answered in future installments, but for me, the ending wasn’t fully satisfying because the fundamental question surrounding the clocks wasn’t answered.

That said, the world building, imagery, and excellent prose kept me eagerly turning pages and left me hungry for the next installment. Brandes has a real gift for words and the imagination to back it up. I can’t wait to see what she does next.