A Last Survivor of the Orphan Trains 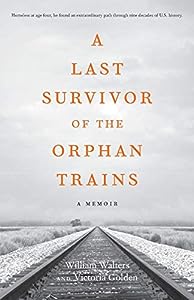 A Last Survivor of the Orphan Trains is a work of memoir non-fiction penned by co-authors William Walters and Victoria Golden. This inspiring tale takes a deep and personal look into the life of William Walters, who was one of the thousands of orphans loaded onto trains from the East Coast of America with the idea that they would find a better life in the emerging West. For William, aged only four years old in 1930, life was far from ideal when his new family turned out to be cruel and abusive, setting him on a path that would see him travel through decades of hardship before he could finally achieve his own version of the American Dream.

This is a powerfully emotive story, inspiring and motivational in its message that keeping going and being resilient pays off, even when the world is unspeakably cruel. Author Victoria Golden works well with William Walters’s story, and the two together make an epic and detailed journey through the Depression, the Second World War and almost right up to present day history as William’s life unfolds. Golden provides additional research into little-known facets of American history, mirroring the issues in today’s fostering system to show that people are far from perfect and the system always needs more work done to ensure that orphans are safe and cared for. Despite his terrible experiences, William’s own inner strength and belief in a better future make him an admirable hero against the odds. A Last Survivor of the Orphan Trains is an excellent memoir, highly recommended.