A Gentleman and a Rogue 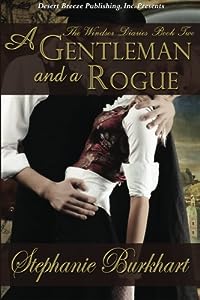 "A Gentleman and a Rogue" by Stephanie Burkhart is a delightful historical romance. Edmund Windsor and his cousin Alice, along with Jonas Byron, return to 2011 and realize that the world is powered by gasoline and electricity instead of the better choice of compressed natural gas. They use a time machine to travel back again to 1855 in an effort to set the time line right. They are faced with romantic, ethical and practical matters as they try to influence the final decision Queen Victoria will make concerning the fuel of the future. Edmund once again meets the love of his life Keira. Keira is afraid to love Edmund and lose him once again to time travel. She spends most of her time working on a combustible natural gas engine to present to the Queen, while trying hard not to think of her love for Edmund. We find Jonas helping Keira’s father build a windmill. Alice is there for her ideas on how to influence the Queen’s decision, even if it means sabotaging all of the presentations but Keira’s. Richard, Edmond’s brother, is sent through the time machine to bring home those who belong in 2011. While in 1855 he also finds his true love and has many decisions to make.

"A Gentleman and a Rogue" is a good read. Stephanie Burkhardt transports us to Victorian England and as we read we wish we could stay there just a little longer. I was hooked in it and did not want it to end. "A Gentleman and a Rogue" is the second in a series. I did not read the first book but Burkhardt gives just enough information for me to understand what I had missed. I will definitely be reading book three. All of you romantic historical fans don’t miss this one – it is a winner.